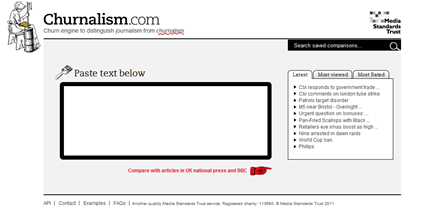 The last couple of weeks have been interesting because there have been some fascinating developments in the world of media. One of those new developments was the creation of a new site called Churnalism. The site has been created by The Media Standards Trust to basically identify where copied press release text is being lifted from and used. On Chunalism you can do the following according to the news release (whoops I have pasted it sorry):

This video which accompanied a great write up in The Guardian is brilliant and shows Chris Atkins and the team on a quest to get untrue news stories into the media to show how our hacks are now lifting copy and placing it into national newspapers. In the older days of PR when I started out, and the dinosaurs will still roaming, the majority of Churnalism would be from the smaller specialist trade titles, who would often also ask us to pay for our articles by adding a colour separation fee. Sadly, those days are still here and with the evolution of the internet and shared content it seems that the newspaper industry still doesn’t appear to be keeping up with online publishing and social media.

However, that said another great revelation came out a couple of weeks ago that pointed out that the majority of Twitter news is still derived from the more traditional news sources such as BBC etc. The article stated:

An analysis of more than 16 million tweets on 3361 topics by HP Labs’ Social Computing Research Group identified just 22 users who were the source of the most retweets while a topic is trending.

And during a trending topic, 31 per cent of all tweets are retweets.

Sixteen of these ‘influencers’ were mainstream media, including Twitter accounts for CNN Breaking News, which has almost 3.9 million followers, Huffington Post, Sky News, BBC World Service and the Daily Telegraph.

I think this is good news because good journalism still thrives its just that the times we are living in means that journalists have to move forward and do more work with less colleagues. I live next door to a senior sub-editor on one of Yorkshire’s largest newspapers and she has told me how tough it is at the moment in the newspaper industry but I don’t need to tell you that.

I think the Churnalism site is a great idea and way of drawing attention to the issue. I also think that the team behind it should produce a white paper or some kind of report on the state of the industry each year, as I would find it genuinely interesting to see if there are real trends in cutting and pasting. One thing is for sure there may be more cutting and pasting but there are still some excellent journalists out there.