The alternative Christmas tune shortlist – vote for your favourite 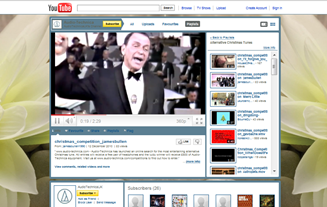 You might remember that I posted a while back about a social media campaign we have been running for the global music manufacturer Audio-Technica. We ran a social media audit and workshop for them and created an online strategy which included launching the alternative Christmas track competition, which has been a lot of fun to run and organise albeit very busy.

In the last few months we have received a huge number of musical entries from all across the world varying in quality and genre. The original aim of the campaign was to seek out fun and vibrant alternatives to Christmas carols and songs and help people to get creative. We launched it using the brand’s Facebook and Twitter channels and a social media news release. Entrants each had to submit their video entries via YouTube but for doing so they received a free pair of headphones for their user generated content.

The competition wasn’t restricted to any particular type of music so bands, DJs or music producers from any genre had the opportunity to show off their talent. The entries have been judged by Grammy & Brit award-winning record producer Steve Levine.

You can vote for your favourite video by visiting this online poll.

The winning entry will be announced on Thursday 23rd December. Here are all of the eligible entries from its YouTube playlist.

The lucky winner receives £500 worth of Audio-Technica equipment and the five runners-up will scoop prizes of £100 worth of equipment each.