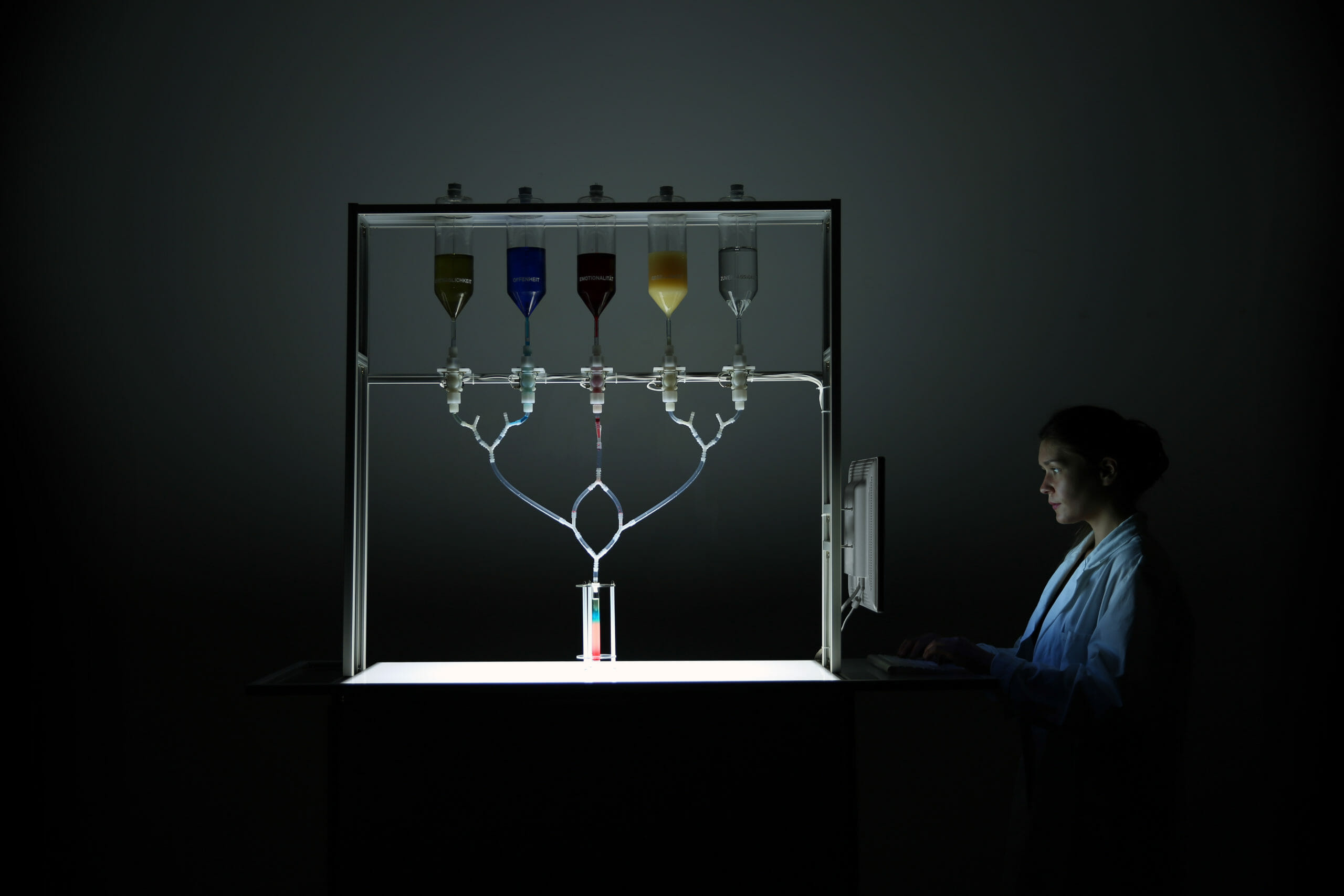 German designers have supposedly created a mobile bar-tending robot that collects a user’s personal data from Facebook to produce their ‘ideal’ drink. Using an algorithm developed by the University of Cambridge, the robot computes an individual personality analysis to create a test tube shot based on psychology’s ‘big five’ personality traits model.

The five different ingredients each represent a different trait; agreeablene ss (green), conscientiousness (clear), extroversion (yellow), neuroticism (red) and openness (blue). Based on the data acquired through Facebook, the percentage level of each personality trait control’s the percentage of each of the ingredient in the drink, making it unique and individual to the user. Although as cool as it looks, it would be interesting to see what my drink actually tastes like – I hope it wouldn’t be bitter?

I don’t know about you but I love anything that uses social media or online data to create something in the real world – the Social Shot does just this and could be brilliant if used as part of a wider PR campaign. By interpreting information acquired from a Facebook page, the Social Shot creates an experiential moment unlike no other. For those that work in PR for the bar industry, it could be a good addition to any bar launch, creating a live event powered by social – it could certainly get people talking! Find out more about the Social Shot here, for those of you that prefer watching videos here it is in all of its beauty.

Hearing about this project got me thinking about other mixology PR stunts and ideas as we do quite a lot for our bar clients at Prohibition.

Back in 2013, the Massachusetts Institute of Technology’s Makr Shakr team created a robot bartender and teamed up with Coca-Cola and Bacardi to bring it to a Google I/O conference. Controlled by a pretty cool smartphone app, the robot created drink concoctions of the guest’s choice based on 100 different ingredients. Guests were also able to use the smartphone app to view other guests’ drink creations and rate them – bringing a social element to the experience too. Using the robot in 2013 for a Google I/O conference is fitting, especially as the annual conference looks ahead for Google’s future tech developments.

Forward on a couple of years and cruise company, Royal Caribbean incorporated a ‘bionic bar’ on part of the cruise ship, Anthem of the Seas developed again by the Makr Shakr team. The bionic bar lets guests choose their drink of choice and the order in which the drinks will be created and mixed together. Incorporating tech to create a live event in which guests are unlikely to have experienced before, definitely creates a PR buzz. Read more about Royal Caribbean’s bionic bar here.

Finally and going back to basics, a Breaking Bad themed pop up bar has opened in London for a limited time. The bar – ABQ – was designed around Walter White’s famous RV where mixologists help guests create unique and exciting cocktails in a chemistry lab setting, using Bunsen Burners, test tubes, dry ice, pipettes etc. The pop up bar, opened in Hackney Wick was launched by the creators of Locappy – an app that lets users to find reviews, offers and deals based in their local area.

It’s pretty interesting to see the different ways PR stunts and wider campaigns incorporate tech to make a statement. These have certainly given me some food for thought for our bigger drink related campaigns early next year.