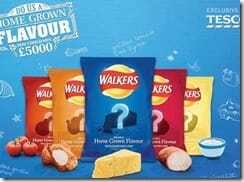 Nothing feeds our ravenous cravings for creative PR stunts quite like a good old foodie campaign. Whether it’s giving away a freebie or doing something eye-catchingly different, campaigns are a great way to get customers involved whilst also boosting sales. Feed your appetite (sorry couldn’t resist) on my chosen top ten social media foodie campaigns of brands whose eyes were bigger than their bellies. Household brand and nation’s favourite Walkers opened themselves up to crisp-lovers of the nation as they let the public get creative with their Do Us a Flavour campaign. Walkers gave the public the opportunity to create their own flavour of crisps by simply visiting Walkers interactive website and submitting their entry online.

The campaign received a rather impressive 1.2 million entries, and with the help of comedian David Walliams and Michelin-starred chef Marco Der Pierre, were whittled down to a shortlist of six. The runner-up flavours included Chip Shop Curry Sauce and Sizzling Steak Fajita and more, with Paul Rothwell claiming the winning prize with his creation of Pulled Pork on Sticky BBQ Sauce which does sound pretty good to be fair.

This campaign made my top ten as it gave the public the opportunity to take matters into their own hands and contribute to their favourite. What better way to improve sales than a good old bit of crowd sourcing. As a result, this allowed for much more active consumerism and therefore, happy, satisfied and very full customers. Greggs was intent on being known for more than its delicious pastry-goodness with its latest campaign #TopSecretCoffee. A simple pop in to your local Greggs can add a pick-me-up to your day with nothing more than a pastry and an iced bun, and what better way than to wash it all down with their latest blend of award-winning coffee. But don’t just take their word for it. The pasty experts put it to the public as they began a nationwide experiential experiment. Thirsty passers-by were encouraged to take a taste test (you can’t beat a good old Pepsi challenge) between a Greggs cup of coffee and a separate cup of coffee, without knowing the brands.

Tasters were also encouraged to tweet in what they thought the brand of coffee was along with the hashtag #TopSecretCoffee. All those that tweeted in were rewarded with a free voucher of Greggs coffee. As a result, this led to many caffeine-filled customers tweeting in pictures of their coffee, further promoting the campaign.

This campaign made my top ten based on the encouragement of the public’s involvement. Not only were consumers incentivised with a freebie, but they were also keen to get involved via the Twitter account and #hashtags. Through the ongoing customer interaction, Greggs was able to successfully promote its campaign as well as its name through taste-testing and online interaction.

3. Say It With Bacon – Oscar Mayer Nothing expresses your affection towards a loved one quite like a bacon sandwich. White bread or brown, smoked bacon or crispy, brown sauce or red; the possibilities are endless. Much like choosing the perfect diamond-encrusted ring, a considerable amount of thought, time and money is invested into making the delicate decision of choosing high-class, luxurious, good old fashioned bacon. The Say It With Bacon campaign furthered this motive by educating customers on the four C’s of Oscar Mayer’s superior bacon; cut, colour, cure and consistency.

Bacon-lovers were encouraged to visit the campaign’s website where they were greeted with a digital pop-up shop, offering a variety of bacon-related presents for the loved ones in their lives. Coincidentally being released in conjunction with Father’s Day, this campaign also offered an ulterior motive to the usual aftershave and Toblerone gifts that Fathers nationwide receive. If there is anything that social media has made us realise, it’s that we love taking photographs of ourselves and our food on a regular basis and constantly sharing them on my timeline. So why not combine the two in an innovative PR campaign? Popular food-on-the-move brand, Urban Eat, did exactly that by releasing the Sandwich Selfie campaign in the New Year. By simply uploading a snap of yourself tucking in to one of its sandwiches to its website, you became automatically entered into their ‘New Year in New York’ competition giving you the chance to bag yourself the chance to spend four nights in Manhattan with £1,000 spending money sadly I didn’t win.

This campaign embraced the habits of social media users in order to promote something as simple as a sandwich. The generosity of the prize was merely an added bonus to selfie-takers and sandwich-eater across the nation. National favourite Heinz Beans recently released a new variety of tinned goodness; Heinz Five Beanz. This particular product was made specifically with adults in mind, cultivating on the fact that tastes change as you get older. Launching a Facebook quiz app, bean-lovers were encouraged to take the quiz to find out which ‘grown up bean’ most suited their personality traits. Quiz-takers were also offered a voucher to try the beans. We all love an incentive don’t we? The campaign reached more than 10.8 million people on Facebook, with the app itself downloaded by 10,000 users resulting in Heinz’s online presence increasing by 30,000 ‘beaniez’. So nice work there for the team.

By adding a childlike twist to an otherwise adult centric campaign, allowed room for the target audience by also engaging the younger generations through social media, as well as offering entertainment to the quiz-takers.

Beans may be good for the heart, but they are also great at social media marketing. Now I love this one, in celebration of the Easter holidays and coincidentally in time for last year’s European and local elections, the Labour party decided to treat us with a chocolate version of Deputy Prime Minister Nick Clegg.

Labour released an Easter Clegg claiming that this chocolate egg ‘does not contain nuts’ and is ‘completely hollow’ amongst other puns. I could think of a few more but we won’t go into that. There were only a limited number of eggs produced, with each one coming with a free ‘mug’. The stunt attracted social media attention with the #hashtag #NickClegg trending on Twitter and attracted national newspaper attention including, The Independent, The Mirror and The Mail Online all covering the story – so kudos to the PR and social team.

Whilst this campaign only lasted for a short period of time, it still had a humorous impact on audiences, more specifically appealing to the comedic side of voters whilst taking the edge off the serious tone of politics. Doritos stole the limelight of the Superbowl by simply tweeting a photograph of a single crisp photobombing the entire event. The tweet received more than 2,500 retweets and more than 4,000 favourites on its Twitter page.

This little stunt made our top ten due to the sheer simplicity and proves that you don’t need months of planning and a hefty budget to create a successful PR campaign. Sometimes the easiest ideas are the best – I am expecting Barack Obama to be photo bombed by the them next. Mr Kipling produced an eye-catching edible billboard made entirely of Kipling cakes, and then proceeded to hand out free Kiplings’ cakes to hungry passers-by. This mouth-watering billboard attracted a significant amount of attention as hungry shoppers wandering past enjoyed one of Mr Kipling’s delicious treat.

Despite the unique aspect of this campaign, this one-off stunt was met with little advertisement other than word of mouth, with no social media interaction encouraged by the brand. A good idea but also a missed a huge opportunity to develop Mr Kipling’s online presence as he has been keeping a low profile recently.

There is nothing worse than waiting for your bus home after a long hard day at work (OK I have a car these days but you know what I mean) with a rumbling stomach that just won’t stop. Many PR stunts have been put in place to satisfy the hunger of those waiting for a bus around the country by several different brands. Walkers were amongst the first the first to take advantage of hungry commuters. By encouraging passers-by to tweet to Walkers their bus stop location, the vending machine would release a trigger resulting in a free packet of crisps being dropped out and it looked so real – I loved this.

Mr Kipling created a similar campaign, swapping the crisps for angel cakes and the tweets for simply pushing a button. One bus stop in London even produced the smell of Mr Kipling’s angel cakes. Nothing satisfies my pizza cravings like the deliciousness of a Dominoes pizza although these days I have had to limit the amount of them I eat. With their endless options, including create-your-own toppings, the longest wait of your day is once you’ve hung up the phone to that glorious knock on your door by the deliverer.

And now Dominoes has opened up a whole new method of delivery and you have got to love it as a stunt. Not only did you get the delicious pizza inside the box, but they also gave hungry customers the opportunity to eat the box itself with their edible pizza box, I heard it tasted a bit like cardboard but I love the idea.

This campaign emphasized that Dominoes goes the extra mile for their customers, not only with their food but also with their delivery – pretty clever.

These are just my top ten foodie campaigns, enough to make your mouth water on a Friday evening and your stomach rumble. But do you think I have missed a clever campaign?

Thanks to Stacey Kedwards for helping me pull this list together some sterling work.