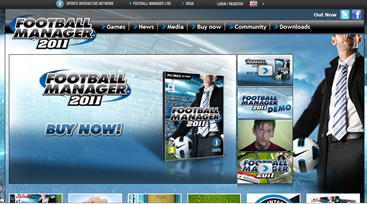 A friend of mine dropped me a note about this new campaign yesterday and I thought it was worth discussing on the blog. JustGiving, the UK’s largest online fundraising platform, and the international children’s charity War Child have teamed up with Sports Interactive and SEGA’s ‘Football Manager™’ in a cause-related marketing partnership launched this week.

Football Manager 2011, which is amazingly now in its sixth series, will include the charity’s’ banners on the virtual advertising boards alongside the pitch, which when clicked, will actually allow users to make donations to War Child through the JustGiving website. I have seen advertising on computer games before but I love the fact you can donate too through the computer game if you are feeling generous. This is thought to be the first time this has ever been done. For every Football Manager 2011 game sold, 10p will be automatically donated to the charity to support children affected by war. Copies of the game can pre-ordered at www.footballmanager.com/pre-order.

To celebrate the launch of the game,they are also running a twitter competition to win a Sony PSP console and a copy of Football Manager 2011. To enter, simply re-tweet the following:

I like a nice charitable angle to a story and Football Manager is a great game, so I think this makes a good combination. I used to to be involved in a lot of cause-related marketing campaigns when I worked at Grayling and to be honest there is nothing better than running a promotional campaign for a good cause. The game launches today – my next question is how do I get my dirty mitts on a free copy?