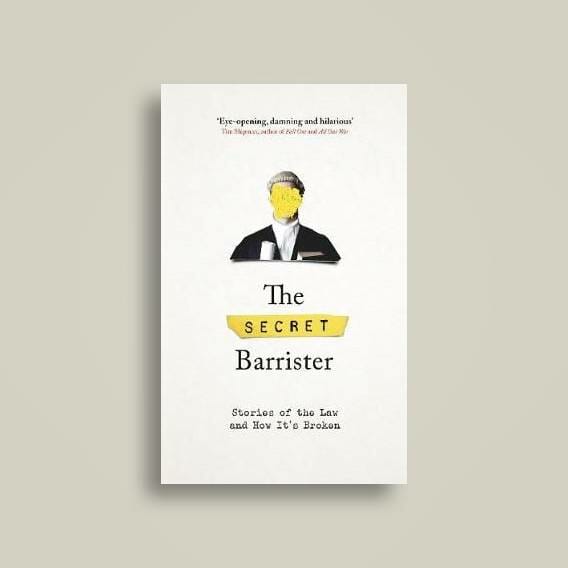 I love to read and I am always interested to read blogs that have become books and this example is no different. The Secret Barrister was the Independent Blog of the Year in 2017 and I managed to read it over a couple of weeks whilst out in Spain last month and I found it both shocking and infuriating at the same time. The book is brilliantly written by a barrister who is doing the job that they love but finding it hugely frustrating and saddening.

He goes into lots of detail about what is great, and more interestingly, what is bad about our current justice system here in the UK. The book asks so many difficult questions it is hard to put it all into a blog post but this is how I saw it.

The cutbacks to legal aid a few years ago, appear to have been applauded in the UK media, mainly because the common perception in this country is people think that barristers are paid huge fortunes but actually as The Secret Barrister points out in criminal law it appears, they aren’t paid that well at all.

Shockingly, a barrister starting out in the legal profession today after five years at law school starts on below the minimum wage at around £12,000 and as a result many are now either going bankrupt or moving into other areas of law where they can actually make a living.

The most worrying part of that particular issue is the judges that rule over our Crown Courts are selected from the current crop of Barristers, and if the best ones are walking out of the door, what does that mean for the justice process in twenty- or thirty-years’ time when you might actually need it?

This is the general premise of what The Secret Barrister is trying to say in the book, it is all good and well cutting costs in Legal Aid and the prisons service but it has now reached epidemic proportions and it is close to becoming out of control.

The book also focusses on the fact in Britain we seem obsessed with locking people up for longer periods than the majority of other European countries. He gives a behind closed doors feel, as this book is written by the guy or girl that both locks people up and defends them.

He freely admits that he has almost certainly seen innocent people being sent away to prison and guilty people get off. He regularly refers back to the fact that anyone can be touched by the justice system but for the majority of time we never hear or see it, and so in general we just hope and expect that it is all running smoothly.

The book takes you on a careful journey through a number of interesting examples on what can and does happen in our criminal courts in 2019. I was particularly shocked by how easy it is for a completely innocent person to go to prison due to the ‘Innocence Tax’.

Innocence tax is the term dubbed after the rules were changed so that if you earn more than around £34,000 you are no longer entitled to any form of Legal Aid.

Now as it stands that sounds fairly OK, although it’s not exactly a high salary, but when you think about it – what about if someone accuses you of a crime and the accuser is entitled to legal aid? They can take you to court and you can decide whether to defend yourself, which is hugely risky. Not only that but, as the writer explains, this costs the courts more money due to the excess time wasted for things which aren’t admissible. Or you can hire a professional barrister/solicitor with your own money, which can then run into tens of thousands of pounds.

As the Secret Barrister puts it:

This “innocence tax”, has seen acquitted defendants forced to sell their homes and exhaust their life savings. It means that the state can falsely accuse you of an offence, and when a court exonerates you, you are nevertheless bankrupted by the cost of defending yourself.

So as you can see, this book does pose a hell of a lot of difficulr and challenging questions. I hope the Government and Justic Secretary read this blog, or his book, as it now feels something needs to be done about our Justice System, this brilliant book has highlighted an important dark taboo that nobody wants to talk about because we just don’t think it will affect us. But our justice system is broken – we need to fix it before it is too late.