The power of personalisation and Thomas Cook’s Brochure Star 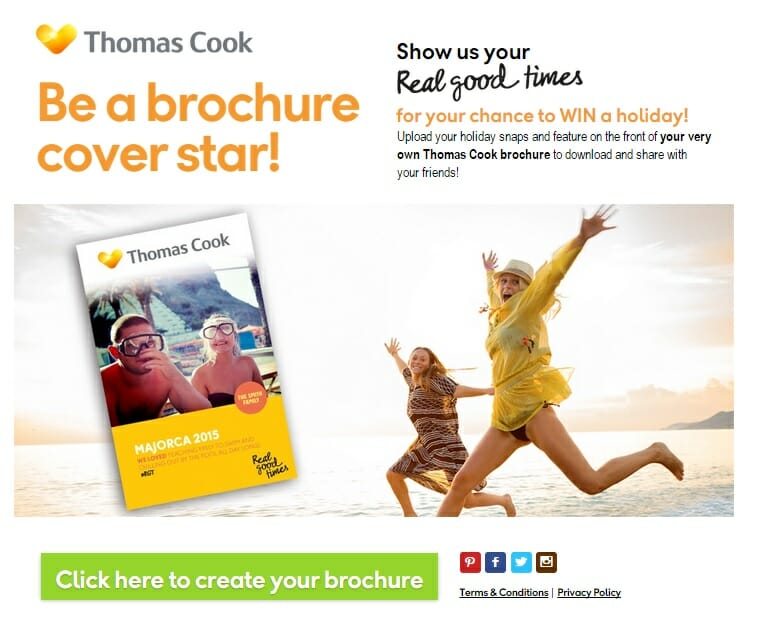 bout its new user-generated content campaign called Be a Brochure Star as they thought I would be interested. I thought it was a nice and simple idea where the brand gives its customers the opportunity to personalise their very own holiday brochure. The user can easily upload their holiday snaps, personalised captions and a chosen colour scheme giving people the control to their own brochure. I remember as a kid always wondering who the people were in the pictures and now it could be you. There can be no doubt the big trend in online marketing at the moment seems to be personalisation and nothing seems to get a consumer more involved in a product than when it’s personalised to suit them. This campaign got me thinking, I have seen quite a few interesting personalisation campaigns recently whether they are in the newspapers or on my Facebook feed so I thought I would share some of my favourites. Coca-Cola – Share a Coke With… During the summers of 2013 and 2014, Coca-cola cans and bottles hit stores nationwide with a slight twist. The Share a Coke With campaign saw the famous logo of coca-cola replaced by a selection of the most popular 150 names and distributed to stores and online. In order to encourage friends to share a coke, consumers put a little more thought into choosing their drink. By making the smart move to include the #ShareACoke hashtag, Coca-Cola’s online presence increased massively. Within six months of the original campaign, Coca-Cola had received more than 330 million Twitter impressions with 170,000 from 160,000 fans, making this its most successful marketing campaign yet. However, it wasn’t only Coca-Cola that used this idea. Many other brands also created a personalised name-focused campaign, including Ben and Jerrys, Cadbury, Iron Bru and more recently Nutella. Starbucks – Nice To Meet You Similar to the Coca-Cola name campaign, Starbucks gave their beverages a personal touch, but for a different reason entirely. The act of writing the customer’s name on their take-out drink allows Starbucks staff to develop a more personal relationship with their customers, and therefore more satisfactory customer service Whilst many customers are eagerly sharing their personalised Starbucks cup on their social media, it does not come without its downsides. Many Starbucks customers refer to their social media accounts in order to highlight the misspelling of their name. Yet Starbucks social media presence has grown significantly, with their take-out cups now instantly recognisable. They can send me one anytime. Evian Water – Baby and Me Following up Evian’s Live Young campaign, Evian created an app that gave customers the chance to ‘unleash their inner baby’. Once a photograph of yourself is uploaded, Evian create a younger version of yourself to see what you would look like as a baby. Many of the results were uploaded up to social media which sparked a huge rise in its online presence, whilst also encouraging customers to get involved with the campaign. The message of this campaign is encouraging customers to drink more water to keep them looking, and feeling younger. Heinz – Get Well Soup  By creating their Get Well Soup campaign, Heinz gave customers the opportunity to wish a ‘get well’ message to an ill friend or family member. By personalising a label of Heinz soup, caring customers are able to personalise the label online. In addition to this, Heinz also give customers the chance to choose from either chicken or tomato flavoured soup. Their personalised soup will arrive at their house with your best wishes in mind. Sky Arts – Selfie Portrait In celebration of the second series of ‘Portrait of The Year’ on Sky Arts, Sky created Sky Arts Selfie Portrait app. By uploading a photograph of yourself to the app, Sky allow you to create an online self-portrait in a matter of seconds. You are also able to edit your selfie-portrait with a variety artistic filters including Warhol, Da Vinci, Cassatt and more.  Sky News Presenters Eamon Holmes and Kay Burley got involved in the social media app as well to help publicise it. The app conveniently enables you to upload and share your selfie-portrait on a variety of social media, including Facebook, Twitter and Instagram. The interaction on social media allowed significant customer interaction in order to promote Sky Arts as the channel, as well as the programme ‘Portrait of the Year’. Burberry Kisses Burberry’s latest campaign aims to spread a little more love through imprinting a kiss. The Burberry Kisses campaign gives those the opportunity to seal a letter with a kiss, quite literally. Through the use of a webcam and ‘unique kiss-detection technology’, an outline of your pursed lips are imprinted. Combined with a short message and a choice of your favourite Burberry lipstick colour, the message is sent across to your loved one via email or Google. As well as sending this to your loved one, it also enables customers to share it across their social media. This campaign aims to terminate the use of the ‘kiss’ emoticon by adding a more personal touch to digitally sent letters. Have I forgotten any campaigns, if you have one I have forgotten about feel free to let me know in the comments?