Video of the week: The Empty Car Convoy 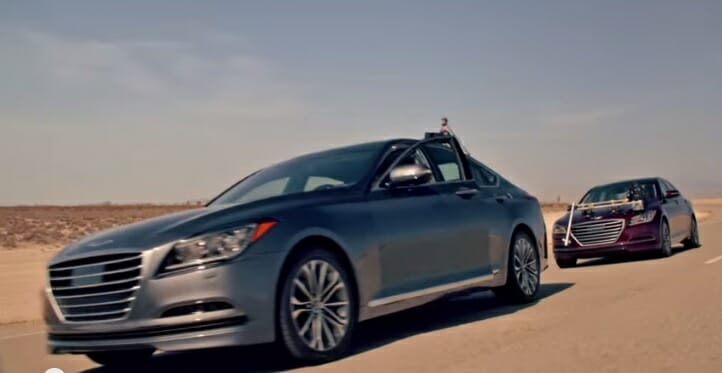 Here’s another nice stunt video from the automotive industry that gets a product benefit across. A self-driving car is something we can all see in the future (not too far away if Google have anything to do with it) but Hyundai already have it! Instead of talking the talk they went straight in and walked the walk by making this clip. Its slogan ‘smart technology to care for you, because we care for you’ might sound a tad cheesy but they couldn’t have chosen a better way to prove it.

This ludicrous video shows drivers jumping off moving cars and leaving them empty before a semi-truck slams on the breaks just in front, not forgetting the one driver who blindfolds himself just to prove the point. I wouldn’t have wanted to fill out the Health and Safety forms for this as it sounds like a recipe for disaster but in reality it created a clever stunt. They shot it with approximately 30 cameras rigged to six ‘smart-caring’ cars, if this doesn’t make you believe in self driving cars then I don’t know what will because I think it’s pretty clever.

The convoy even though going around a bend surprisingly seems to stay in perfect formation and doesn’t appear to get anywhere near to crashing which is reassuring. The driver assist features shown include cruise control, lane keeping assist system and auto emergency breaking. Each of these features are demonstrated perfectly – if not a little too perfectly. Lets hope that the next year doesn’t see drivers powering down for naps or jumping out their sunroof because this video showed how well a car can drive by itself.

So come on Hyundai let me test drive one and see if it is really as good as the stunt.