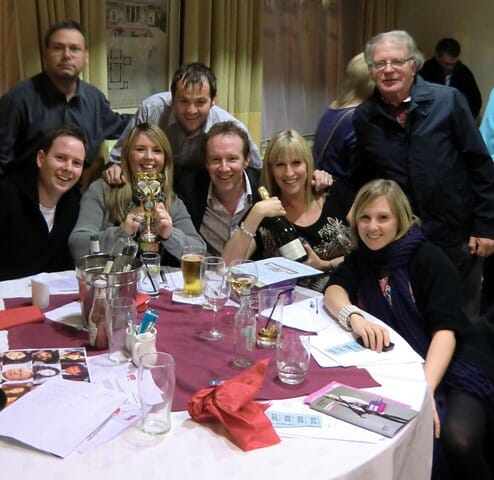 I posted a while ago about a quiz I was organising to help raise money for a couple of charities.

Well last night all the magic came together and we held the quiz at The Cosmopolitan Hotel in Leeds. It was held in the memory of the former business editor of the Yorkshire Evening Post Nigel Scott. The reason I wanted it to do it was Nigel was a great guy and someone that made us lowly PR people feel at ease. He truly was the nicest journalist I have ever spoken too.

I felt an event that brought all of the PR companies and local media together for a good cause with some great entertainment and good banter would be a great thing for the local PR industry as a whole.

Last night we had more than 85 in attendance with teams from most of the local consultancies such as Grayling, Finn Communications, Umpf, The Right Agency, Beattie Communications and many more.

We also had a good turn out from the local media with the YEP and TheBusinessDesk.com in attendance.

When I started this I wasn’t sure how it was going to go but it sold out in three weeks and it was such a roaring success I am already planning on organising a much bigger event early next year as I know there were a lot of other people and companies that became interested in the event. Don’t worry guys I haven’t forgotten you!

The quiz was professionally organised with a quiz master and included picture, audio and video rounds and if I am totally honest it was pretty tough. Luckily, I managed to grab/blag a table with my friends from Umpf, The Right Agency, Gary Taylor and Nigel Keenlyside. It was really close all evening and the leader board changed more times Wayne Rooney’s bed sheets but the winning team were surprise, surprise my table: The Right Umpf – see the picture on the right.

Adrian Johnson and Sarah Giangregorio went up to collect our trophy and they basked in their glory. I would like to say we won due to my brilliance in general knowledge but sadly this was not the case. This was accentuated when we got to the advertisements round and I realised that I hardly watch any adverts at all now due to PVR recorders. I will bin mine later.

My commiserations go to the Grayling team (Grayling’s Got Girth) who picked up the wooden spoon award for coming last (sorry Vicky I couldn’t resist).

All in all it was a great evening and so I would like to personally thank everyone for attending and creating such a brilliant atmosphere – it really was a great night.

***Update here is some coverage which I secured in the Yorkshire Evening Post.

****There is also a blog post here from Ian Briggs.