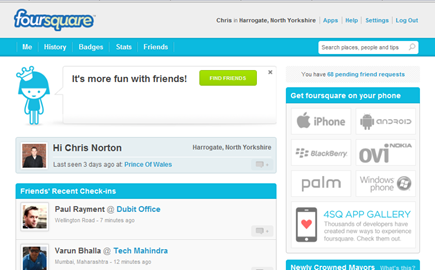 Yesterday was a pretty exciting day, not least because it was the football transfer deadline day and we saw the British transfer record broken but also because Facebook announced Facebook Places Deals product in UK and Europe and I think this is going to be a big deal.

I think Facebook played catch up following the huge excitement of Foursquare and to a lesser extent Gowilla in 2009/10, as people across the world used their mobiles to check-in to local venues and give their tips and advice on certain places. Foursquare had been around quite a while when Facebook launched its Places product but as soon as it did the mobile check-in game began to change. Why? Apparently, there will now be four types of check-ins with Places Deals:

According to the Guardian:

Through deals with partners announced today, the first 30,000 Facebook users to check in at Starbucks stores in the UK can claim a free coffee, the first 1,000 to check in at Debenhams will receive a free mascara and makeover, and the first four to upgrade their contracts and check in at O2 stores will win a free Xbox or Playstation.

Mazda, Yo! Sushi, Usher and Alton Towers also announced offers, while Argos and Benetton are donating to charity with a set number of checkins. Companies can list themselves for free in Deals, and Facebook says it does not take any share of revenues from the promotions.

Personally I use Foursquare and Facebook Places differently because I tend to have two totally different audiences but that could just be me. Most of my school friends for instance don’t tend to use Foursquare but are nearly all on Facebook which means I share different content on different platforms.

In my mind Facebook Places Deals is now the social media mobile equivalent to a loyalty card and its all going through their mobile platform. You have to tip your hat to them because its a genius move. I know a lot of people who don’t use Facebook at all on their PCs but now they have a smart phone they are checking in and out every time they stop for a Starbuck’s Coffee.

I think this is the start of proper ROI on social meida as brands track how many check-ins and products they have sold using social media promotions.

Do you think Facebook Places Deals is going to change the way brands interact with their fans?