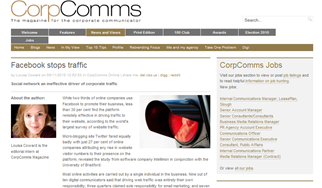 I read an article today about a survey, which is reported to be the largest into online traffic, that sadly I whole heartedly disagreed with. The article which appeared in CorpComms Magazine stated the following about the survey:

While two thirds of online companies use Facebook to promote their business, less than 30 per cent find the platform remotely effective in driving traffic to their website, according to the world’s largest survey of website traffic. Micro-blogging site Twitter fared equally badly with just 27 per cent of online companies attributing any rise in website visitor numbers to their presence on the platform, revealed the study from software company Intellimon in conjunction with the University of Bradford.

So if this study is correct and I have read it rightly it is saying that less than a third of online businesses find Facebook or Twitter “remotely effective” in driving traffic to their websites. Are you serious? Really?

They do go on to state that the survey is shocking but REALLY?

Secondly, as a digital PR professional I simply don’t believe that if an online business is using these two social media channels they won’t prove effective in driving traffic. Why? In one word – experience.

I have worked at various social companies and now run one myself and frankly when I (or the royal WE) have used these channels properly, we have almost always had an effect on traffic and usually not a small one.

For instance, for our latest client Audio-Technica I recommended they use Flickr to share their product images from their website and in just under three weeks that became its fourth biggest referrer of web traffic. That is just one example but I have loads.

Even for our business-to-business clients I always find Twitter to be a significant driver of online traffic. Twitter is all about links to useful things, such as blog articles, if you share useful links people (your friends) will click them and in turn you should get traffic by providing good content it really is that simple. However, something inside me here makes me feel that maybe the businesses in this study had not been running their campaigns properly and if I am honest that’s a good thing because it shows there is still a gaping void between clever execution in social media and poor execution. In my mind anyone can set up a Twitter or Facebook page for a company but sadly many feel that once they have done this they have ticked that particular box. The truth is that is just the beginning. The clever part is creating a new community which helps fulfil a genuine need.

So I think the headline of the article was there to grab my attention, and it did that but do I believe that Facebook stops web traffic? No I don’t and neither do a small company I know called Google.