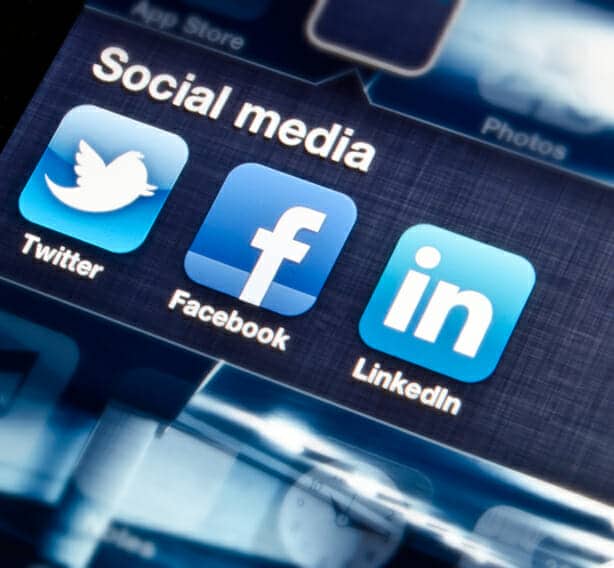 I was recently running an advanced social media training session with a number of senior female academics and when the subject of LinkedIn was brought up. I started discussing how it was useful to raise your profile in the higher education sector and I was met by a series of hesitant glances.

I wondered what was wrong and the academics told me they don’t use LinkedIn for one main reason; because men approach them on it all of the time. Now, I may not be up to date with the latest online dating trends as I am of a certain age- apparently, there are people getting engaged on TV before they’ve even set eyes on each other – or so my team tell me, but I was completely flabbergasted. I personally have never heard of this before, but there are seemingly a lot of men out there using LinkedIn like Tinder or Bumble.

So after this revelation I ran the idea of writing a blog on this by my team and received a flurry of examples of this actually happening to them too, so why is it that women in particular, are subjected to this on what is supposed to be a professional social platform?

With nearly 660 million members, LinkedIn is the most popular network of its kind. I do loads of LinkedIn Training, the platform describes its mission as:

Not ‘connecting the world’s professionals to hot potential dates’.

How to avoid getting unwanted messages on LinkedIn

During my research into this rather bizarre matter, I’ve stumbled across a number of somewhat concerning articles; some featuring tips on how to avoid getting creepy messages on LinkedIn, others offering advice on why LinkedIn is a great tool to find a date and even a Buzzfeed article dedicated purely to weird creepy guys who really need to delete their LinkedIn accounts immediately.

It seems, that some people are seeing LinkedIn as the place to find out all the relevant info about a potential suitor before having to speak to them. With profiles often containing someone’s occupation, work history, education, hobbies, volunteer work and a clear face shot, it’s apparently a better way to work out if someone is ‘your type’ than their Tinder profile.  I mean really guys???

But, of course, these chaps are not stopping at looking up profiles and this is where the real issue lies. Women are being bombarded with inappropriate, creepy and just downright weird messages that have nothing to do with career opportunities or professional development.

Nicki Donohoe, a make-up artist we work with regularly at Prohibition, has more than had her fair share of unsolicited LinkedIn messages. Nicki says

“I actually think Instagram is the worst for these messages, but I guess we kind of weirdly have learnt to accept them because we show pictures of ourselves on there – another issue in itself. But LinkedIn, the only picture of me is a headshot on my profile – that’s it! The rest is all my make-up and styling work.” 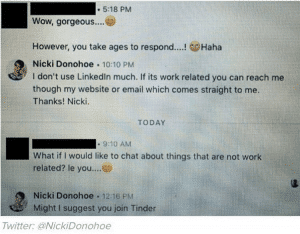 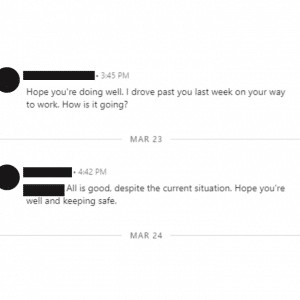 “I’m all for outing these people, I’ll upload the screenshots to Twitter, shockingly most of them are married with kids. If I don’t respond I’m called rude or told to chill out – I’ve actually received death threats before.”

Although a slightly more subtle approach, it’s still not a good idea to message to tell someone you drove past them on the way to work and then offer them your number – even if you do know them.

Using my LinkedIn network to find other examples

When I reached out to my LinkedIn network for a few more examples I was met with stories of being asked out to drinks in a night club, “you look gorgeous in your profile picture”, wink emojis and the dreaded messages from the ex – definitely not the place to try and rekindle a romance.

Women should not have to stop using social networks or be continuously bothered by unwanted messages and it seems in order to avoid this they’re turning to female-only alternatives. In 2017, dating app Bumble launched a female-only network.

“At our office, we’ve all heard stories of women who’ve received inappropriate and unwanted messages on professional platforms.”

“Bumble Bizz’s women-only networking feature was driven by our users. Women asked for a women-only option and we listened.”

So why aren’t LinkedIn doing more to stop this? I am genuinely interested in why this type of behaviour isn’t stopped or at the very least monitored.

LinkedIn is supposed to be a social platform that can be used by academics in higher education or any sector safely and securely. It is supposed to be the place where people can network and collaborate together – it is certainly not a dating application.

Do you suffer from people propositioning you on LinkedIn?

Have you had problems with men or women approaching you on LinkedIn let me know in the comments – I find it fascinating, we need to try and get this stopped.

Sorry, no related articles to display.