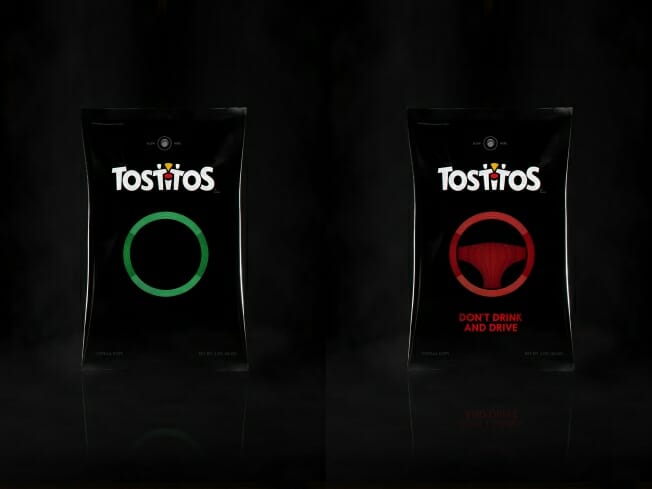 With campaigns becoming increasingly more integrated and digital, I like to stay abreast of what has been happening in the creative sector. I mean it can’t hurt to be aware of the finest campaigns and the best ideas and executions can it? I like to use them as inspiration for our next campaign at Prohibition although often they are in completely different sectors but it can help you whilst you are scratching your heads in a brainstorm.

As I write this I can’t believe it’s already the 19th July, so as we are easily half way through the year. What better to time to share a list of my current favourite campaigns so far? Here they are:

1. Back in January, Tostitos created a new super bowl crisp bag that can call you an Uber – I like this idea. The American crisp brand had created a brethaliser-esque ‘chip’ bag for the super bowl. The aim of the campaign was to reduce the amount of drunk drivers on the road therefore reducing accidents. The bag picked up how many alcohol particles there were in the person’s breath and if exceeding the limit, it lit up a code that could be scanned by a phone – calling an Uber and giving the user a nice $10 off the bill. Visually they looked great – god knows how accurate they are though.

2. Bus stations all over England were hit with this new board, sending a message to smokers about how they are affected from the damage caused by constant harmful gas intake. A breathing tube ran out of the board and the more breath a person could let out, the more of a message was revealed. I think this was successful, as it highlighted the effect of smoking on our breathing. A message was revealed – depending on how hard and long they could blow for – the message included the following text:

“If you are a smoker, you may not get much further than this line. However, with the help from a Stop Smoking adviser, it is much more likely that you will be able to quit for good, so you will have a greater chance of making it down to this point here.”

I liked this idea but I think the actual message that was revealed could have been a bit more visually appealing as it looks a little dull. Still a great idea for a campaign though.

3. One month later and we are staying on the topic of interactive bus stops. This time its with a campaign promoting Samsung’s new Gear S3 smart watch in Israel. If you are listening Samsung – feel free to send me one as they look cool as hell. A male model posed in a bus shelter advertisement for the watch, making the shelter advert seem normal, until people approached and the audience started to realise the shots of him were actually being live streamed and were fully interactive – all of it was pretty cool albeit in a different language, I have included the full video below.

4. Nikon executed a clever campaign as it set up a vision food truck in order to encourage adults to take eye tests. In France, the Nikon Vision food truck created a menu that resembled the good old fashioned eye test. Members of the public could only order the food that they could actually read. Those that couldn’t see clearly were offered an on the spot eye test and then a complimentary premium burger after. Over the ten days the promotional truck was used by more than 5,000 people who got their eyes tested. This is a nice campaign that got the key messages across. I have worked with a few eye surgery brands so I am keeping an idea like this one in my back pocket.

5. This month (July) everyone’s favourite media brand Netflix came to London with its nights in pop up hotels. Basically your bill could be paid off by watching your favourite Netflix original series – I mean that’s worth a punt right especially with the new Game of Thrones? It combined Samsung (showing off its screen quality), three (showing off its streaming ability) and still promoting Netflix. I would have liked a pop up hotel up here in Leeds to give it a go myself.

6. The New Zealand fire service got creative by making a virtual 360 degree house fire. The 360 technology allows participants to try and escape a house fire, overcoming various barriers liked locked doors and jammed windows as the blazing fire gets worse. The aim was to highlight how serious house fires can be and make people setup an emergency house escape. The end results ended with the video receiving 86,000 shares and the video being watched more than 10 million times. As a proud owner of a Samsung S8 headset – I think I am going to have to have a go at this one.

7. Capcom has created an immersive virtual resident evil experience to scare its fans. The iconic video game franchise launched this stunt to help the release of its upcoming new game. It incorporates an ‘escape room’ type feel in Dubai where fans had to explore the horror house using tools they found to escape.

8. Back in June a campaign that caught my eye was one from IKEA. The Swedish home brand launched a flat-pack cooking campaign which looked rather clever. The campaign introduced the concept flat-pack cooking, with cooking parchment being the instructions and even edible ink. What I loved about this was the size of the items was the actual size of the portions. It was perfect for IKEA as it highlights exactly what their brand is all about, it featured their food items and who doesn’t love a simple recipe?

9. Between 30th May – 2nd June Lucozade provided some lucky London commuters with free trip on the underground with contactless bottles. Giving out free Lucozade bottles in rush hour, these had a free contactless pin on the bottom of the bottle which gave them a free ride. To increase awareness of this commuters were left bemused on their daily tube journeys as BGT stars Twist and Pulse , team GB gymnast Nile Wilson and ballet sensation Alessia Lugoboni were spotted using their bottles to work their way through the crowds. The soundtrack is pretty cool too. This campaign is nice team up but I did think it was a little random and I couldn’t understand how Lucozade connected with travelling on the Tube.

10. When Adobe decided to compete with IBM, Google, and Salesforce in the digital marketing space, they knew they had to go big and bold. And they did not disappoint. Their “Marketing is Bull” ads were raw, blunt and direct to the point, and the results apparently delivered. Over the course of the campaign, Adobe is reported to have generated 96 million video views, achieved a 45% increase in direct sales inquiries, generated tons of press exposure including a full page in the New York Times. Well that all sounds good but I love this video they did below – it’s comedy genius. We all know someone out there in the agency world who uses far too many buzzwords – feel free to let them know about it.

So there you have it. Those are my top 10 PR campaigns to date in 2017. Do you have a campaign you think should have been included? Let me know I am always interested to hear about them.